I watched the incredible documentary called “Nefertiti Resurrected” based on Egyptian Queen Nefertiti and I discovered the female Egyptologist who was responsible for uncovering the controversial mystery surrounding Queen Nefertiti’s body and remains in the year 2003.

Her name is Dr.Joann Fletcher and I was completely blown away.

First I had to admire her for being a woman. We usually only see historical and geological documentaries being made by men. Secondly Joann’s passion for her job (which is by no means for the faint hearted – conditions are harsh)- I find astounding, mesmerising and inspiring.

This is a woman who has dedicated a large part of her life to research and history.

She’s not interested in being a dainty lady who doesn’t get her hands dirty. She’s simply focused and gets the job done.

Dr. Joann Fletcher had this astonishing, courageous and admirable avid belief that if she could only find this beautiful former Egyptian Queen’s body, and lay it properly to rest then Nefertiti’s soul may finally find peace in order to transition on to the after life.

We’re talking about an English lady here who does not practise any of the Egyptian religious doctrines, neither old or new, and yet she respects the old Egyptian traditions that say –

This is an ancient Egyptian curse.

A mummy like this had lain forgotten in the Valley of Kings for 3000 years. No one knew who it was and for ages people wondered why this body was cursed.

Dr. Joann revealed that this was Queen Nefertiti’s corpse.

Queen Nefertiti not only disappeared into oblivion after her death, but the tomb she was buried in had been hijacked by grave robbers who had mutilated her body. This is just one of the discoveries that Dr. Joann Fletcher made.

Joann was working with the ardent conviction that her discovery of Queen Nefertiti’s body could finally free Nefertiti soul and give her the peace and dignity she ought to have left this world with as a Queen.

Joann was unrelenting until she achieved her mission.

I think that is such an incredibly admirable thing.

Especially in this world we live in today where people are so insistent in ramming their religions, cultures and beliefs down each other’s throats.

It’s a refreshing breath of air to see someone who genuinely cares about others beliefs, culture and who is selfless and determined to pursue excellence in a vocation such as archaeology/Egyptology which is a less trod career path for the fairer sex and equally less celebrated by the world.

Archaeologists and historians are ROCK stars and should be celebrated.

They piece together the golden threads that keep our historical records, stories and heroes alive.

Without them we disconnect from the past.

They hold the key. They tell life’s stories.

It’s because of historians, archaeologists and geologists that we know who we are and where we are coming from as a human race.

Dr. Joanne Fletcher is brilliant, intelligent, relentless in determination, and tremendously inspiring to watch for any woman in pursuit of a dream.

Queen Nefertiti’s body had been lost for centuries and because of the insistence and persistence of Dr. Joann to follow a hunch she had, she  perpetuated a re-opening of the Valley of Kings in Egypt – Nefertiti’s body was found and identified at last after a gruelling identification process was carried out by Dr. Joann and her team of international forensic experts. Also with the help of ‘Discovery quest’ and using the latest forensic technology. Their escapade was sanctioned by the famous Dr. Zahi Hawass.

It was the largest scientific expedition in 25 years in the Valley of the Kings.

Joann and her team forensically reconstructed the face of Nefertiti and restored her missing remains to its original identity once again. It matched the astonishing and beautiful legendary relic that was the mask/bust of Queen Nefertiti discovered by German archaeologists in 1920.

And yet a large part of Queen Nefertiti’s life remains a mystery. The name ‘Nefertiti’ means that the beautiful one has come. Nefertiti is one of the most Extraordinary female characters and queens in the history of ancient Egypt. It is said that Nefertiti’s power was unsurpassed. She married a Pharaoh, bore six children, ruled as co-regent to Akhenaten and helped lead a revolution that would change Egypt forever.

She and her husband led an Exodus from the ancient capital and built a dazzling city in the heart of the desert.

For some she was a religious zealot, a conspirator, a traitor. Others saw a heroine, a living goddess and Pharaoh who made the ultimate sacrifice to save her country.

What happened to Nefertiti is one of Egypt’s greatest unsolved mysteries.

Many a time – Dr. Joann was discouraged in her pursuit for the lost Queen’s body but she never gave up. Joann was met with resistance and months of delay by the Egyptian authorities, and yet she persisted until she achieved her goal – find Nefertiti – free her soul. Give her the proper burial she deserves as both a human being and an Egyptian Queen. 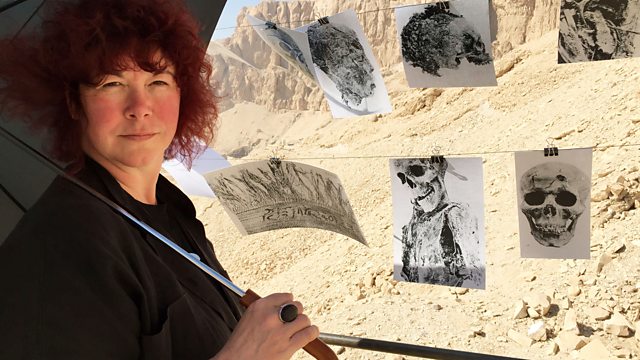 In order to uncover the lost remains of Queen Nefertiti Dr. Joanne had to embark on a journey back in time, to over three thousand years ago when Nefertiti was still alive…in order for Joann to rewrite history…and she did!

Joanne had to trace Nefertiti’s life, family, customs, religion, culture and socio-political life and recreate these stories all over again.

Joanne pieced the puzzles together bit by bit until she understood that Nefertiti and her husband the King Akhenaten had instigated many enemies against themselves for the simple reason of radical religious worship. King Akhenaten and Nefertiti had raised a rebellion in Egyptian Amu priests when they tried to impose the worship of the sun god on the nation and cast aside the religion of old. The royal couple had also stripped the Amu priests of their power and forcefully plundered some of their wealth.

Another discovery that was made by Dr. Joann was that Nefertiti had single handedly ruled a once more unified and peaceful Egypt as a pharaoh who’s name previously replaced Nefertiti’s as the successor of Tutankamhun. A Pharoah named Smenkhare – but Dr. Joann uncovered that the mysterious Pharoah Smenkhare could indeed have been Nefertiti who had outlived two Pharaohs – Akhenaten and his son Tutankhamun – and then took hold of the royal reigns once again after Tutankamhun’s premature death.

Nefertiti’s actual cause of death still remains a mystery but the remains discovered by Dr.Joanne indicate possible murder as Nefertiti’s remains revealed a stab wound at the side of the stomach.

After her death, Nefertiti’s body was laid to rest in the famous Egyptian Valley of the Kings but soon afterwards her mummified body was smashed, the arm severed, the tomb ravaged and plundered in a way that indicated her assailants wished to wipe her history off of the face of the earth by bludgeoning not just her cadaver to the point of unrecognition, but also by destroying her relics, statues and structures that she and her husband Akhenaten had constructed or erected during their royal reign. The tomb raiders stripped Nefertiti’s body and tomb off of every trace of rank and power.

This is why little remains of Nefertiti’s time.

Even her wig was ripped off her head. Her skull was smashed obliterating her face and identity – the ultimate sacrilege – denying her entrance to the after life. (In Egyptian tradition) It was a fate worse than death. But they overlooked a tell tale clue. A clue over looked by everyone, except Dr. Joann Fletcher.

Dr. Joann is an expert in a rare Egyptian field – ancient Egyptian hair.

A wig is like a blue print – leading to the time it was made and who it was made for. In Nefertiti’s case – an ancient Nubian wig only worn by royal women around 1300 and 1400 BC. Pictorial evidence showed Nefertiti wearing a wig exactly like the one Joann found and studied. In hopes of finding Nefertiti, Joann had to trace down the story behind the wig.

THE STORY OF THE WIG – In 1898 French Archaeologist Laurier stumbled across a tomb with three mummies hidden behind a stone wall in the Valley of Kings. One of them seemed mutilated. Beside it, Laurier found a wig.

A century after Victor Laurier – Dr. Joann headed for the hidden tomb with the three mysterious bodies in it. One of them was the violated body of Nefertiti. Joann made the connection to the missing wig and to the wig worn by Queen Nefertiti during her reign over 3000 years ago.

Nefertiti’s enemies – whoever they were, wanted to inflict on her the worst harm possible – which in Egypt at the time was not only death but was to mar her soul from transitioning peacefully to the afterlife. As much as was possible in Egyptian old traditions and superstitions.

Who were these enraged enemies of Nefertiti and Akhenaten? Most fingers point towards the Egyptian Amu priests of old who believed that Nefertiti and her husband Pharaoh Akhenaten had committed the highest form of religious sacrilege by looting their priestly temples, by disrespecting their traditional rites and influence and by introducing a new sun god – thereby negating the old.

Doctor Joann Fletcher has given Nefertiti back her name.

After more than 3000 years, the curse on Nefertiti has been lifted.

The Egyptian book of the dead describes the trials of a lost soul:

“For when a soul recovers its name it is once again made whole. It can speak to the gods and be restored to its rightful place in the after life. Returning to the land it once knew. It can complete the souls last journey to eternity.”

Dr. Joann Fletcher is an Egyptologist and an honorary visiting professor in the department of archaeology at the University of York. She has published a number of books and academic articles, including on Cleopatra, and made numerous television and radio appearances.