That Lady Thing in San Francisco gives issues of sexism an unlikely coat of color in a lighthearted way of communicating a serious message.

“It was hard for me because each room is designed by a celebrity or a brand, so there’s no inter-arching narrative,” said Shaw, a creative director at the agency Eleven. “Storytelling is not at a continuum, it was almost like a shopping mall version of itself, layer upon layers of social phenomenon.” 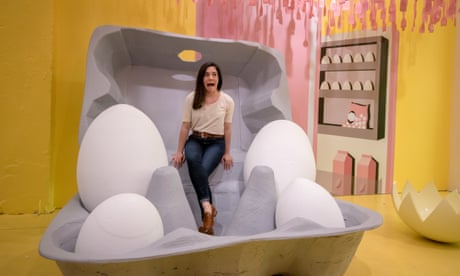 The pop-up selfie museum craze is taking over America – it may have started with the Museum of Ice Cream – and it may be good for Instagram, but often lacks substance.

That’s part of the reason why Shaw is bringing a snarky feminist installation called That Lady Thing, a pop-up with purpose which “serves up selfies with a side of self-respect”, to San Francisco.

“We wanted to get our messages about gender inequality out there in a creative way,” said Shaw, “so we infiltrated a generally vapid space to inject some substance into the superficiality.”

The exhibition invites guests to collect fake dollar bills in the “money gap” room, rock climb “the corporate climb” and cross a ball pit of breasts called the “sea of objectification”.

Shaw and her team didn’t set out to make a pop-up museum, however. It all started this spring when she launched the Lady Factory, a one-night pop-up centered around women’s issues for Women’s Day. It was such a success, having been called the woke girl’s version of the pop-up museum, she decided to continue it on a larger scale and for a longer period of time – but still within the context of the selfie museum.

“We wanted to turn this trend on its head,” said Shaw. “These places exist for no other reason than to take pictures with the pop-up as the backdrop, it’s a one-dimensional vanity exercise. But we find tension in putting something with substance in that backdrop and creating a narrative based on statistics that demonstrates gender bias.”

It was partly inspired by the recent wave of feminist activism including #MeToo, Time’s Up and the Women’s March.

“With women banding together to speak out in this moment, it is very resonant,” she said.

Shaw and her team built the exhibits to jazz up statistics – in 2016, it was reported that women were paid 20% less than men, while the number of female CEOs in the Fortune 500 is at an all-time high of 32, which is still just a menial 6.4%.

“Packaging this content in a colorful masquerade is not normally how feminist conversations look,” she said. “We’re presenting something that is highly stylized but is underpinned with how we are not paid equally, which is more true for women of color, or how we’re treated as objects. Women revel in posting their ideas with their photos.”

But making these issues more playful with pink-painted sets and plastic toy-like accessories could easily be misread the wrong way.

“We’re not diminishing the import of the issues; we’re raising them in front of a wider, partially unengaged audience,” said Shaw. “When you present feminist thinking in a way that’s relatable and approachable, everyone becomes an activist.”

It’s also a way to bring ideas to a younger audience, as there are declining art museum attendees for millennial-aged museum-goers who might discover art on Instagram and Pinterest before stepping foot in a gallery or museum.

Especially with the Metropolitan Museum of Art in New York City’s entrance fee hike for all non-New Yorkers, engaging youth continues to be a challenge, which is why museums are turning to special hashtags and even phone charging stations.

There are “the future is female” T-shirts at shopping malls, but Shaw wants to dig deeper beyond the “pink it and shrink it” trend.

“We have made something candy-colored but there is irony in what we’re doing,” she said. “We’re trying to make something women will genuinely respond to because of the substance, not because of the look of it.”

In the “corporate climb” room, which is focused around how few women are at the upper ranks of management, when one climbs to the top of the pink wall, nothing special is awaiting climbers. “We’re still clawing our way to get up there, to create a way to get to the top,” said Shaw. “We’re trying to mirror reality as we see it today.”

The “moneymaker” room is filled with fake dollar bills and a fan so the money blows around like a tornado, which is meant to tap into the wage gap.

“Women don’t hit their peak earning potential until we’re well into our careers,” said Shaw. “Women retire with little money, many grow up with ‘that’s the man’s thing to do’, but women live longer than men. This financial conversation is what women have been left out of.”

The ball room of breasts called “the sea of objectification” has been nicknamed as the “tit pit” on social media, but that is beside the point.

“It’s provocative to have a pit full of breasts, as it can come off as tone deaf, is this what we’re saying what women are? A stack of breasts?” asks Shaw. “This is the antithesis of what we are, we’re saying society treats us like anatomical objects, play things, non-real beings with agency.”

A portion of the installation’s $28.45 entry fee will donate funds to the National Women’s Law Center and other women’s organizations, but Shaw hopes visitors will take action in their own lives, as well.

“I’m hoping people will donate to causes, that’s what we’re focused on,” said Shaw. “I also hope the topics invite women to speak out and ask about wage audit at their work; it’s interesting to bring this conversation into a pop-up museum, to bring this spirit of activism to it.”

The title of the exhibition is a bit vague, but that seems to be the point – “That Lady Thing” – which is a bit sarcastic, but references a kind of ignorance.

“That’s how men would talk about this if they didn’t understand it, ‘Oh you know that lady thing’,” said Shaw. “It captures the micro-bias and micro-aggression we all feel in certain spaces; it’s dismissive.”

*Extract from The Guardian